You’ve reached the Swiss page of the Global Research Alliance 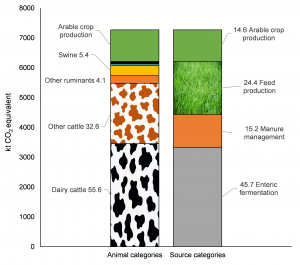 Figure 1: GHG-emissions from agriculture in Switzerland in 2016. Allocation to animal categories (% without arable crop production) and emission categories (kt CO2 equivalents) (based on Bretscher et al. 2018).

In its climate strategy, the Swiss Federal Office for Agriculture declared the intention to reduce agricultural greenhouse gas emissions by 2050 by at least one third. By including demand-side measures, a reduction target of two thirds has been set as the goal. The necessary legal provisions to achieve these reduction targets will be regulated in the agricultural policy. Hereby, the focus lies on 1) animal stocking densities adapted to local feed availability (particularly ruminants on grassland), 2) closed farm nutrient balances, and 3) specific technological mitigation measures. Specific provisions are included in the agricultural policy and will be developed further in future policy frameworks. Implementation of mitigation measures will be promoted mainly via financial contributions for sustainable production systems. Adoption of mitigation strategies in practice will be accompanied by a broad participation process among all actors, expansion of scientific knowledge, and a general improvement of the framework conditions.

Switzerland is a founding member of the Global Research Alliance on Agricultural Greenhouse Gases (GRA). It sees the GRA as one helpful instrument to be able to meet its ambitious mitigation goals. Switzerland expects to learn from the successful approaches of other countries and profit from mutual experience. It also offers to share its experiences and scientific knowledge with other countries, particularly those that share a similar landscape and climate. In addition, Switzerland expects and has made considerable progress in research on GHG mitigation through participation in multi-national projects facilitated by the GRA.

The Swiss Federal Office for Agriculture (FOAG) represents Switzerland in the GRA.