Voice of America article on the aims of the Alliance to meet food and climate change concerns “We’re bringing together two big ideas here. The world’s got to produce a whole truckload of more food in the next 30 years to feed three billion more people that are going to be on the planet…. And we’ve got to try and reduce the emissions intensity of that,” said Tim Groser, New Zealand’s minister of trade, who’s also responsible for the country’s climate change negotiations. Read the full article

The Wall Street Journal links the Global Research Alliance with a speech made by Kofi Annan, former Secretary General of the United Nations. “Climate change is estimated to have increased the global food bill by $50 billion a year. Mr. Carter argues that science will be able to deliver where politics has failed: to devise a global approach to tackling food security and climate change, two of the world’s most pressing issues” Read the full article

Farming First reports on the Ministerial Summit and the Launch of the Latin America Research Partnership funded to meet the goals of the Alliance.

The New Agriculturalist posts a news article on the Ministerial Summit “The reality is that globally, not enough research has been focused on reducing agruicultural greenhouse gases, compared to other sectors such as energy and transport. The Alliance changes this.” Read the full article

The Summit was an opportunity to bring together Ministers and other representatives from Alliance countries to formally launch the Alliance’s working phase. This was marked by the signing of the Alliance Charter, along with presentations from the Chairs of the Alliance’s Research and Cross-Cutting Groups, and statements from individual countries. The event was hosted by New Zealand. Read the summary report from the Ministerial Summit here. 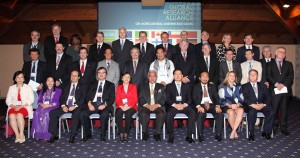 Heads of Delegations at the Alliance Ministerial Summit

Read more about the fund and how to apply at the New Zealand Ministry of Agriculture and Forestry website.

A recent posting on ‘Investment in agriculture and access to markets will help to feed the world’ from the Poverty Matters Blog ahead of the G20 agriculture meeting mentions the Global Research Alliance as an excellent example of coordinating research resources.

“at the global level, new alliances are coming together to co-ordinate research funding and policy harmonisation. A great example of this the Global Research Alliance on Agricultural Greenhouse Gases, which brings together more than 30 governments to pool funding allocations and co-ordinate research. The alliance’s goal is to improve the agricultural system’s ability to grow more food without increasing greenhouse gas emissions.”

On 8 June, the Inter-American Development Bank (IDB) and the Regional Fund for Agricultural Technology (FONTAGRO) signed an agreement to co-fund the first collaborative livestock emissions mitigation research project Latin America and the Caribbean. A contribution has also been made by the Government of New Zealand.

The project, selected during IDB FONTAGRO’s 2010 call for proposals and with additional funding support from New Zealand, will be implemented in Argentina, Chile, Colombia, the Dominican Republic and Uruguay, to improve the national greenhouse gas inventories and develop mitigation options adapted to the farming conditions of each country. The project is linked to as an example of collaborative activity arising from participating countries in the Alliance’s Livestock Research Group.

The leaders of the United States and United Kingdom issued a joint release on Higher Education, Science, and Innovation Collaboration between their two countries following their meeting on 25 May 2011. In a paragraph highlighting the importance of continued collaboration and concerted international effort in clean energy and climate science, the Global Research Alliance receives an explicit mention:

Clean Energy and Climate Science: The two leaders agreed on the importance of continued collaboration and concerted international effort in clean energy and climate science. They expressed their strong support for the next Clean Energy Ministerial, which will take place in London in 2012. They endorsed the announcement of UK co-funding of the National Science Foundation’s Partnerships for International Research and Education program in the area of Sustainable Materials for Energy, agreeing that sustainability should be a key consideration when making choices among competing energy technology options. The U.S., through its Department of Agriculture (USDA), will continue working with the UK as a part of the Global Research Alliance on Agricultural Greenhouse Gases to address mitigation of greenhouse gases from croplands, livestock production systems, and paddy rice, while enhancing food security. In addition, the UK and U.S. entities are engaging African and Asian developing countries in the Agricultural Model Intercomparison and Improvement Project to better understand the implications of climate change on food production and food security around the world and to develop adaption strategies. They emphasized the importance of data sharing and open science data policies that support climate research and modelling.

The Global Research Alliance is pleased to welcome South Africa and Italy as its newest member countries. For more information on Italy’s membership follow this link to the article in the Italian Ministry of Agricultural Food and Forestry Policies online magazine.

For more information on Italy and South Africa’s participation in the Alliance or how to become a member country please contact the Alliance Secretariat.

The Global Research Alliance Senior Scientist (GRASS) Award will support scientists from New Zealand and from other Alliance countries to undertake exchanges on research projects into agricultural GHG mitigation, for up to six months.

“We know that the world faces a major challenge in producing more food at the same as tackling climate change,” says Mr Carter. “Science plays a crucial role in finding solutions, and these will come with greater collaboration between research communities across the globe.”

“It is what the Global Research Alliance was designed to do, and the GRASS awards will be an important link in our agricultural GHG mitigation efforts.”

Mr Groser says the new awards will provide further opportunities for capacity building within the New Zealand science sector and will strengthen the relationship between scientists across Alliance countries.

Guidelines for the GRASS Award scheme can be downloaded here [PDF]. For more information and to access the application forms, please contact the GRASS Award administrators at the New Zealand Agricultural Greenhouse Gas Research Centre.